Express Lanes are a Traffic Solution?

A common refrain that we hear is that we need to build Express Lanes to “solve” congestion issues.  Sounds great!  While listening to planning presentations, traffic “studies,” contractor models, and official meetings, we hear about how much of an improvement Express Lanes can be, while their operator attempts to maximize revenue. 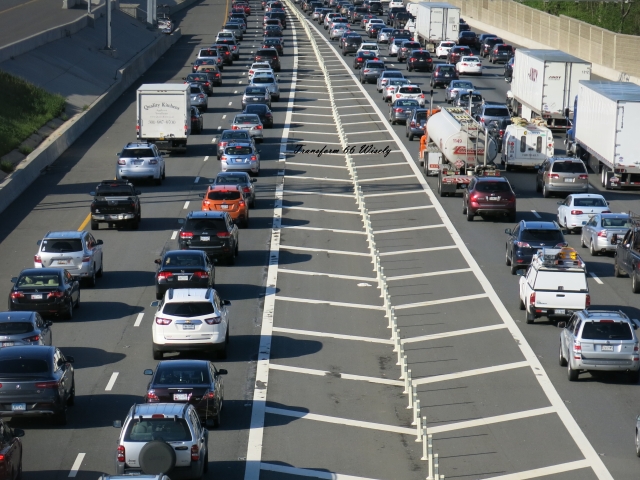 Express Lanes customers have the privilege of paying a toll for their traffic jam.  The drivers on the right are jammed with a new merge choke point for free.  (April 2017)

The congestion through Tysons Corner was even worse after the Express Lanes opened.  The main difference is drivers now had the opportunity to pay an expensive toll to sit in stop and go traffic.  Now drivers in the free lanes also contend with a large left hand merge onto the Interstate freeway.  Traffic experts realize that merging is a major source of backups and congestion.  Left hand merges are even worse, and the Federal Highway Administration (FHWA) discourages their use on freeways.   VDOT decided their new solution would be allowing active shoulder driving on the left shoulder at the end of the Express Lanes.   Naturally, this was never tried before the Express Lanes were built.  So gantries were built, green arrows were installed, and a taupe color was painted on the left shoulder.  VDOT prefers red for shoulder decorating, but FWHA had already complained about the red color installed on I-66.

After this work was done, the congestion continued, except there was more of it.  The photo above shows I-495 Northbound this week on an average afternoon.  The weather was clear and sunny and there were no traffic incidents or accidents ahead.  We see a typical congestion mess with the Express Lanes.  The same photo can be taken nearly every day.  The only difference is the drivers on the left are paying a toll to sit in their traffic, while the drivers on the right endure the traffic and merging for free.  For I-66, the primary difference will be that the gasoline tanker on the right side will be allowed in the “Express Lanes.”

The new congestion isn’t limited to the freeways.  The “traffic studies” never studied the Express Lanes’ impacts on traffic flow in other roads.  Most of the Beltway Express Lanes access points resulted in new traffic signals, snarling local traffic even more.  At Route 7/Leesburg Pike, a free flowing junction was replaced with a traffic light with long waits in all directions.   Even where Express Lanes allowed faster Beltway traffic flow, it did so at the expense of folks on local roads now forced to wait for those new lights.  Naturally, the VDOT and TransUrban studies never studied this impact.

For I-66, the planned Express Lanes will terminate at the Capital Beltway.  The merge delays and congestion seen above on I-495 will now be duplicated on I-66, enhanced by the added complexity of an entangled concrete jungle.  Not to worry though, the traffic models and studies have traffic “solved” once again!

This entry was posted in Government Policy, Transportation Planning. Bookmark the permalink.

5 Responses to Express Lanes are a Traffic Solution?